In May 2016, the major genealogy resource Find My Past announced that they had completed a three-year project to publish 10.5 million parish records in conjunction with the Yorkshire Digital Consortium.[1] For those studying the life and works of the clergyman and author Laurence Sterne, this update makes available many records from the parishes where Sterne undertook his clerical duties. These include images of the parish registers analysed in the key biographical works on Sterne, and utilised most recently by Karen Harvey to more closely interrogate Sterne’s manuscript practices in relation to his fiction – the curious blottings, marginalia, notes, and doodled sketch of Sterne’s own profile can be quickly located when browsing the Sutton-on-the-Forest register for 1665-1806.[2]

More exciting still is the possibility for making new discoveries about Sterne’s early clerical career, of which precious few documents survive. Following a brief spell in the parish of St. Ives in Huntingdonshire, Sterne’s first appointment in the North came as assistant curate of Catton in the East Riding of Yorkshire, to which he was formally licensed on 18 February 1738.[3] Precisely when Sterne arrived at Catton is unclear, but it has been hypothesised that he served the parish from the autumn/winter of 1737, on the basis of a dispensation issued to the rector, Richard Sowray, to hold the living in plurality with the vicarage of Askham Richards on 3 June 1737.[4] It has been presumed that Sterne had gained this appointment through his familiarity with Sowray at Jesus College, Cambridge, but this rural parish seven miles from York may have held greater significance than simply its proximate distance from the Sterne family estate at Elvington.[5] The parish registers reveal that a Simon Sterne was baptised at Catton on 11 May 1687 – most likely a brother of Laurence Sterne’s father who died in infancy.[6]

Given that Sterne likely served Catton for just six months, it is unsurprising that his biographers have found little trace of his activities in the parish – in 1929 Curtis stated that Sterne ‘left no memorials of his office’, whilst Cash noted that he ‘left no record in the parish registers’.[7] There is, however, a class of records published by Find My Past that do not appear to have to have been previously consulted in this search for Sterne’s early clerical career. Parish register transcripts (or bishops’ transcripts) are contemporary copies of baptisms, marriages and deaths that were ordered to be transmitted to the diocesan registry on an annual basis.[8] Ordered to be completed every Easter, the transcripts were usually compiled by the officiating minister of the parish at that time – whether that was the incumbent, curate or a neighbouring clergyman – and occasionally featured small variations from the original parish register entries. This can be useful in helping to determine who was undertaking parish duties at that time. In Sterne’s case, the register transcripts for 1737-1738 give further weight to the assumption that he was responsible for managing the parish during his brief time at Catton. 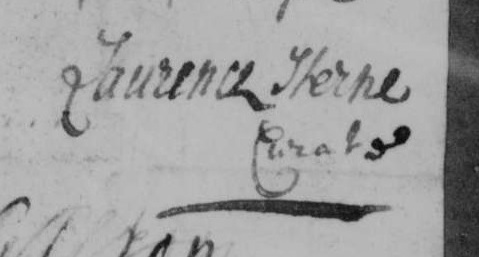 Revealed here for the first time, the parish register transcripts were compiled and signed by Sterne, with entries dating from April 1737, until 20 March 1738 – just two weeks prior to his assumption of duties at Sutton-on-the-Forest in April 1738.[9] In addition to providing a rare insight into Sterne’s activities at this formative stage in his clerical career, these records reinforce the swiftness of his early ascent in the Church. With the support of his uncle, Sterne progressed from a humble curacy of £30 per year to a respectable living and prebendal stall of York Minister in less than four years.

[6] Borthwick Institute of Historical Research. PR CATN 1 – online at Find My Past.